The citrus industry stands at the ready in times of need

No other drink says breakfast like a glass of orange juice.  It is nature’s first superfood. Sweet, tart and packed with vitamin C and antioxidants.  Humans have probably been juicing oranges since they started cultivating citrus in China, ca. 300 BC, but we generally didn’t drink orange juice until early 1900, when California growers developed the marketing campaign, “Drink an Orange” to deal with the glut of fresh fruit they were producing. 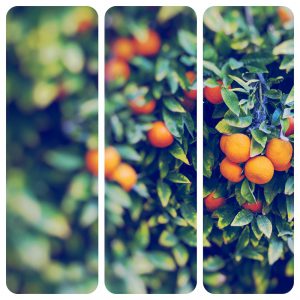 Later, to deal with scurvy in WWII, the Florida Department of Citrus and the U.S. Government developed frozen concentrated orange juice (FCOJ), which today is largely what’s shipped across the world to supply the global juice market. In 2019, global orange juice sales topped $8B. Sales are expected to increase by 30% in 2020, largely driven by the COVID-19 pandemic.

There are at least 30 clinical trials underway testing vitamin C as a defense against COVID-19.  Some of these trials are testing with doses 10 times the recommended daily dose of vitamin C. In delivering 14.2 grams of vitamin C per fluid ounce, the tried & true vitamin C vehicle of orange juice (OJ) has been rejuvenated as a superfood to boost your immune system and stave off COVID-19.

Today Brazil, the United States, China, Mexico, Egypt and Spain dominate the world market, with Brazil being by far the largest supplier, crushing 12 times more oranges than the United States, and supplying 80% of European  and 50% of the U.S. juice market. Times change, and regions adapt. 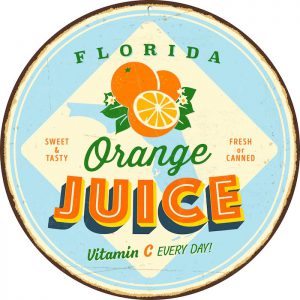 FLORIDA ISN’T THE ONLY GAME IN TOWN:

US consumers associate orange juice with Florida, but times have changed, and the story has become more complex. The global supply chain of orange juice is supplied by at least 6 countries, creating a decentralized web of growers, processors, trading companies, blending houses and juice packers, before it gets to our table. While Florida dominated the U.S. supply of orange juice until the mid 1980’s, climatic issues, like frosts and hurricanes, hit the region hard, while increasingly modernized agriculture in other countries allowed them to fill the gap.

While global orange production is at an all-time high, the sector is being plagued by several diseases that are devastating groves in the Americas, forcing growers to change their practices, and incurring increasingly greater costs. A bacterium called Candidatus liberibacter (Clas) has infected orange groves across the world, forcing major juice producers to rip up plantations and start anew. 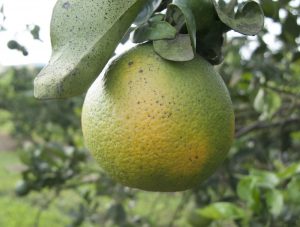 Like the malaria parasite transmitted by mosquitoes, Clas’ insect vector, the citrus psyllid (Diaphorina citri), introduces it into the tree’s vascular system through a bite on a leaf. Once inside, the bacteria finds a cozy place to lodge and replicate, feeding off the sugars in the tree’s phloem (the “arteries” of the tree), until they plug it up, and the plant starts to die.  Oranges stay green, and don’t mature, so the disease is called “Greening” or “HLB” from the Chinese Huanglongbing (Yellow Dragon Disease).

For a row-crop like soy or corn if affected by this type of disease, the crop would be lost, but could be replanted the following year.  For perennial crops it’s a whole different ballgame. Orange trees live and mature for 20 years, so yearly “turn over” and planting is not a sustainably effective option, making for more headaches and expense for citrus growers dealing with a disease spiraling out of control.

Citrus producers have found temporary management strategies to deal with the onslaught of HLB, adopting costly and unsustainable strategies to address this disease, including extensive insecticide spraying and ripping up plantations and moving them elsewhere. 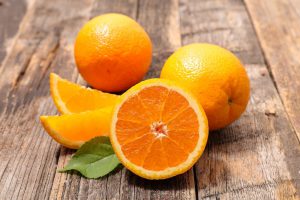 Brazil’s orange grove is an impressive 2 times larger than that of Florida and California combined, and spans the states of São Paulo and Minas Gerais in the Southeast of Brazil.  Luckily, for the time being, growers are able to rip up and replant their infected groves, migrating towards the southwest of São Paulo state, where the cooler climate is less hospitable to the citrus psyllid than the dryer northeast. These measures have managed to keep the juice flowing, but at tremendous costs, and we’re seemingly losing the battle to citrus greening.

In addition, to support growers with the latest scientific knowledge, the industry has co-funded several highly qualified research foundations such as Fundecitrus in Brazil and the Citrus Research Defense Foundation (CRDF) in Florida, whose mission is to develop solutions and strategies for industry partners.

Because of HLB, since 2009, juice output in Florida decreased 72% while fresh fruit output decreased 21%.  For Brazilian farmers, on average, HLB impacts about 20% of the acres in Brazil and has led to the elimination of at least 52 million trees since 2004. That’s about one third of the total stand.

WORKING WITH THE CITRUS INDUSTRY – WE’RE ON THE THRESHOLD OF A SOLUTION:

At Invaio, we have scoured the world to find the most promising and sustainable technologies available that could meaningfully address Citrus Greening, and we can see light at the end of the tunnel.  Specifically, we have partnered with University of California Riverside researcher, Dr. Hailing Jin, who identified natural antibacterial biomolecules (peptides) that kill Clas with incredible potency.  These peptides are found in certain citrus species and have been in the food chain for thousands of years.

We have combined these molecules with our precision delivery technologies, delivering minute doses directly into the tree’s veins, and are seeing impressive results.  This is a prime example of how we solve problems, by addressing an urgent need in the market with a combination of “best-in-class” technologies, leading to impactful solutions.

We have started working with the top leaders in the global citrus supply chain to get our solutions in their hands and bring value back to their production.  In our efforts to work together with brands and research foundations such as CRDF and Fundecitrus across the U.S. and Brazil, our global team is forging new ground, as we develop precise and natural tools to bring back the citrus industry from the brink of collapse. Together with foundations and industry partners we’ll be leading efforts to ensure that a glass of cold, nutritious orange juice remains on our table far into the foreseeable future. 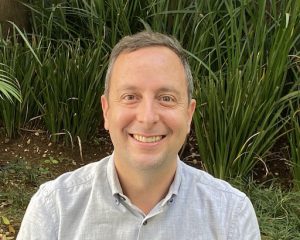 Avram has worked for 13 years in agribusiness and industrial biotechnology across Brazil, Europe, and the United States.  With a background in Biophysics and Synthetic Biology, he led R&D and Commercial teams in global companies including Amyris, Braskem and Indigo Agriculture.  An entrepreneur, Avram co-founded InstaAgro.com in 2015, leader in online sales of Agricultural inputs in Brazil, and Harvest Consulting, helping companies enter the Brazilian agriculture market.  Currently, Avram leads commercial efforts in Latin America at Invaio.  He is author on 5 scientific articles and 11 patents.  In his spare time, he enjoys outdoor sports, gardening and cooking.